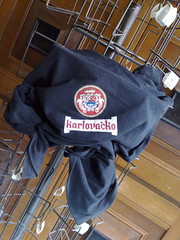 It was not so long after the ending of the war in Serbia the couple entered the beershop.

I think I told them the only beerthings I collected was beershirts.

This is a beershirt, the man said, pointing at his shirt.

But nowhere on the T it says it is beer. Or that it is about beer.

I do believe the man. I know it’s beer.
But I don’t dare to wear it.

So I’ll just do it today.

I don’t accept remarks about it though.