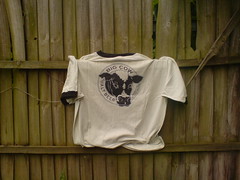 Initially I wanted to call this a Quadrology. But the word doesn’t seem to exist.

Then I wanted to dedicate it to Bob & Mary. They are my biggest T-suppliers.

Each year they come flying from their hometown, close to Seattle, to Amsterdam. They leave me with lots of bottles of beer.
I drink them. But forget them too.
Hm, that’s the disadventage of tasting, I think.

At home, at their Cask Ale Club, they collect T’s. So they can leave them also at mine.
I can’t forget those, because I wear them all year around.

Bob & Mary love the Quad. They have several ‘years’ standing in their beercellar. To let it mature.

The Quad, that means La Trappe Quadrupel. I love that word.

Here’s a Quadrology, although it doesn’t exist.